Our Mexican-style property was built with exceptional care and attention to detail.
Below, you will find information about the many unique aspects of our property. The stove and cast iron sink are circa the 1940s and stand proud in their own right. Extra steel was to support the sink which took 4 men to install because of the weight. Extra steel was also added to the roof pour to support the iron pot rack, a grate that is a relic from the Colorado gold mining era and was used along with a crusher to separate the gold-laden ore.

The cabinet fronts are made from un-galvanized tin, allowed to rust, and then sealed with oil to prevent flaking. 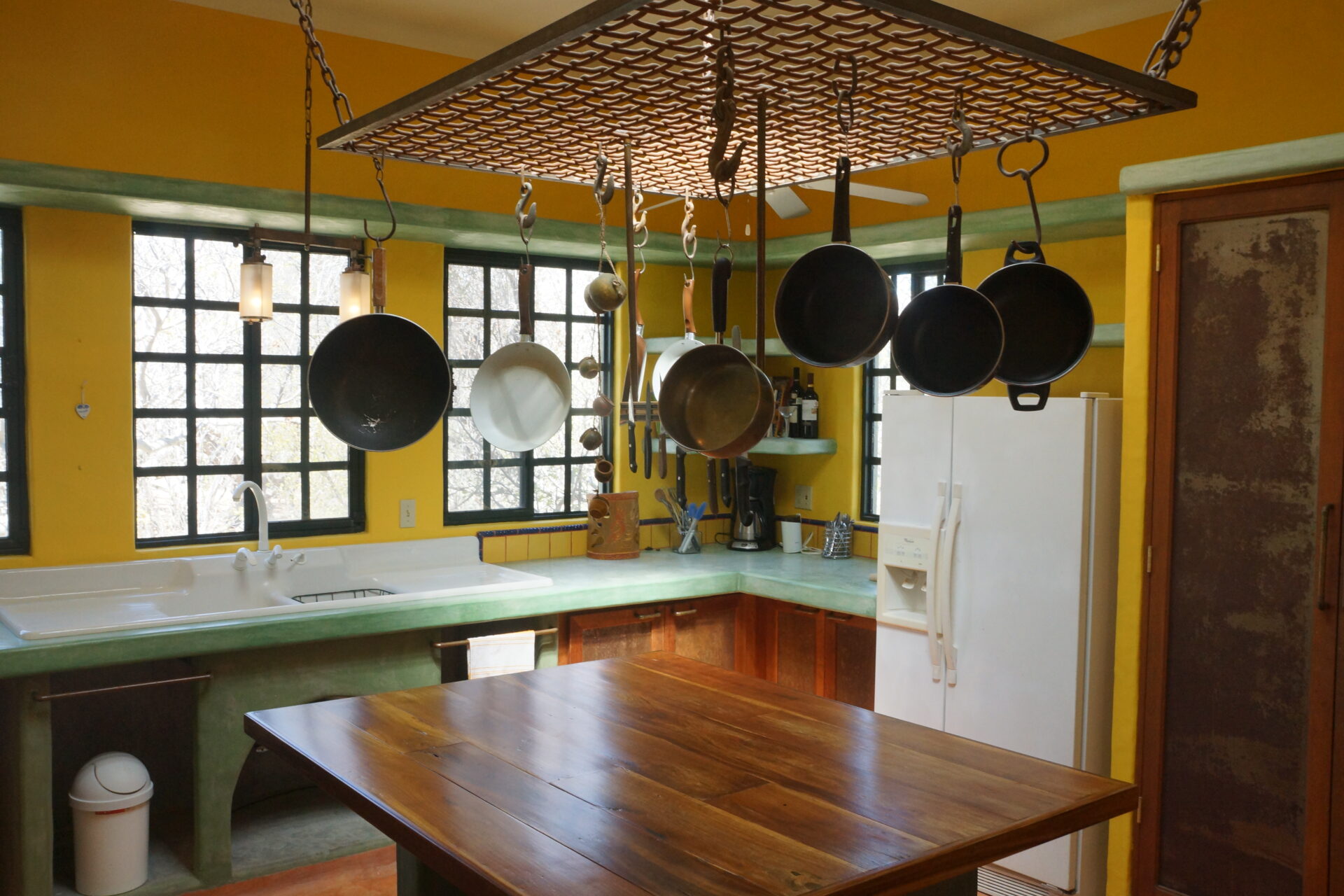 The stepped archway between the kitchen and dining room is reminiscent of the traditional Spanish/Moorish influence. It defines the separation between the spaces along with an ‘arroyo treasure’ (found after a hurricane), a chunk of mesquite wood, that is embedded in the floor and notes a change in floor materials from pulido to mosaic.

The cornice molding is a replica of a Frank Lloyd Wright design used in one of his homes. These moldings can be reproduced by the local ‘yeso’ man—he uses a gypsum compound and carves the pieces to the desired shape.

The contemporary halogen chandelier is one of a collection of award-winning designs produced by Tech Lighting, originally from San Francisco. The arms can be configured in any shape you wish.

The Moorish mosaic floor tiles are 1” thick. It takes 4 steel molds to produce the two interlocking shapes of star and rosetta. First spotted in an entryway floor of an 1890s hotel in La Paz, the designer set out on a mission to find the molds. It took her three months of searching but they were finally found in the backyard junk pile of a marble headstone carver. He recognized the patterns and it took another two months for him to finally find the four pieces in his pile. Each tile is custom-colored and hand-pressed in the molds, released, and left to dry for 2 weeks in the shade—one by one. These tiles were also fabricated for the master bedroom and closet in different color patterns. The beehive-style gas fireplace in the corner throws sufficient heat to heat the entire room.

The Mexican pine ceiling beams come from the mountainous state of Durango on the mainland and were so wet when they arrived that it took 4 men to carry each one. The delivery truck dumped them banded in bundles in the middle of the street. The crew cut them apart, stickered them (to allow air to circulate between and reduce the drying time) restacked, and re-banded them (to prevent twisting) in the shade for use 18 months later. When they were ready to be installed, they were cut apart and it only took 2 men to carry each one—that’s how much they had dried out.

The interior plasters in all the rooms (except the pulidoed shower walls) are a custom mix of white cement, marble dust, and powdered cement color using a different trowel technique in each room, some new to the workers. One advantage to this formula is that any soil marks can be sandpapered off. 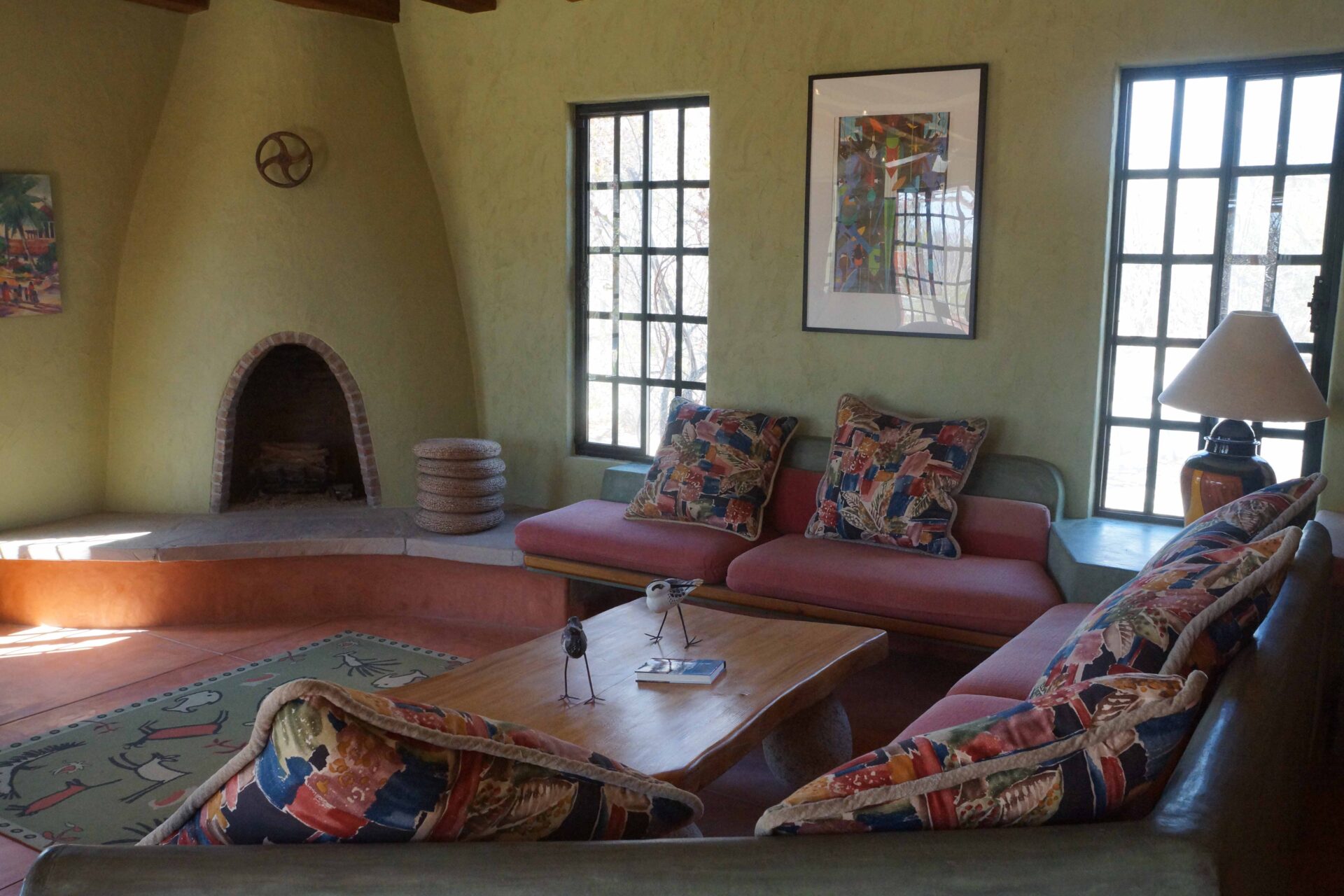 The handwoven grass mats on the ceiling are one successful technique used in deadening the echoes prevalent in hard-surfaced or cement construction. Ceiling beams are another method used to stop sound from bouncing.

The periwinkle blue sink in the bathroom is a 1950s hair salon salvage piece that sits on a steel irrigation pipe and ultimately on a truck brake drum. The mosaic glass 1” tiles used to decorate this sink are the same types used in making the shower floor dragon, named Celeste.

The metal air vent set into the north wall was originally used as a hot air vent in an 1890s Denver, Colorado hotel, and the towel shelf was used as a luggage rack in a train. Note the slant to it so the baggage wouldn’t bounce off.

The striated wall texture was new for the workers and they tried many times to perfect it before the final product satisfied them. We had many a laugh especially when one of the men tried to make the vertical ribs using a toothpick.

There is a tile inset into one of these walls given to the casa as a present from the contractor, Sara, who made it. I asked the workmen to each sign their name and one of them declined. It turned out that he didn’t know how to write and so with a little help, Abelardo’s name was added. Another Frank Lloyd Wright molding adorns this 5’ x 5’ x 10’ room. The chandelier is a 1910 vintage from an old house in Central City, Colorado. The 1950s Kohler sink is called a ‘peg leg’ for obvious reasons. The trompe-l’oeil tiled floor was a first for the tile setter. He studied the pattern for several days before he would tackle it—he had to visualize it first, he told me.

There are 4 storage rooms in the main house, each with a Mexican antique wood door and American antique hardware. It’s kind of like bookshelves and exterior showers—more is better!

Large tree-top patio, beams, grass mats, Spanish mosaic tiles, flowing silk curtains, ‘crane’ type rods, and a big closet with a laundry drop in the floor that exactly deposits the clothing into the top of the washing machine below. Now that’s romantic!

An exterior shower with views! There is also an interior shower for those cold days. French tile with lavender-blue pulido walls and window views in all directions. Mature palo blanco trees offer total privacy.

Recently renovated one large bedroom, bathroom, kitchen all plumbed, wired and gassed, its own laundry facilities and private entrance. We have had many friends and renters staying in the casita over the years and everyone finds it comfortable with plenty of patio space and a great advantage point for bird watching.